So it’s been awhile since I last read a novel.  Even now that sounds so very indulgent…I think the last time I had chunks of free time to read, I was in the final trimester of pregnancy, and was reading Ina May’s Guide to Natural Childbirth, and Chopra’s Guide to Holistic Childbirth.  After Finnegan came into my world, little blurbs of time were spent scouring various child development books, checking milestones and looking ahead to what we could expect in the upcoming months.  Now that things have begun leveling out (sometimes) with regard to household management (um, I mean Domestic Goddess rituals), Mommy-ing, and Mommy time, I ran into this gem of a novel at the library, and fell in love.  The only difficult part was having to put it down when I heard the distinct rumblings of Finn waking up from nap time. 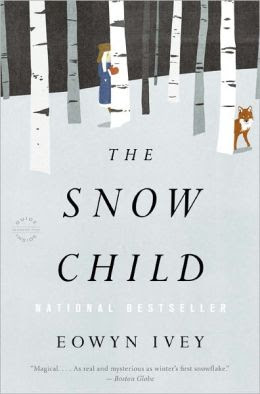 Eowyn Ivey’s Snow Child is part historical fiction about homesteading life in Alaska during the 1920’s, and part folktale based on a Russian myth of a “Snow Maiden” found in the story.  In it, Mabel and Jack have relocated to the harsh Alaskan landscape, in search of a new start after a tragic loss of an only child during the last trimester of pregnancy.  Despair, exhaustion and melancholy is taking hold of them both, but in a brief moment of happiness they create a small snow child.  The next morning, the child is gone, however, they begin noticing a small girl flitting about the forest, able to survive in the woods by herself.  As the story unfolds, it becomes a tale of desperate longing to believe in hope and renewal.  It also shows the evolution that parents must go through of wanting to care for and protect their children, but ultimately the need to believe in their capabilities.  It also reveals the hardest thing to do, as a parent: to release them to the universe to create their own lives and happiness.  It is a tale of such sorrow, but ultimately of such hope, that will make you cling to your loved ones with ferocity.  Darkly whimsical, while being true to the brutal realities of early homesteading life in Alaska, it will haunt you long after you put it down.  If you happen to also be from Alaska, it will make you proud of the roots that have been put down by those who came before you as well.  I'm so glad that the first indulgent use of my time was reading this book.
Posted by mrs.brewer at 1:26 PM 1 comment:


How do you leave a place you have grown to call home?  A place where you know when and where the sorrel and boletas and wild rhubarb are ready to pick, and follow the seasons of the flowers during the summer months that nourish your soul? 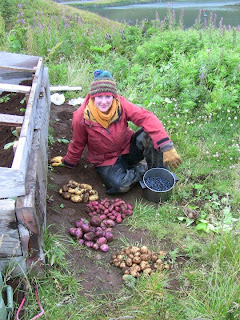 I feel as if we’ve decided to rip our roots up and try to transplant, although not sure if the weathering process will do more damage, or make our leaves stronger.  In this town we became a family.  We were married.  Bought a home.  Decided to start a family.  Survived the loss of our first pregnancy, and welcomed a beautiful light into the world.  Here I met kindred spirits and became an artist and played music and found a voice for myself.  These are not simple roots offshot, but tap roots dug deep.  How do you transplant without a little of the ends being ripped off?  I feel so intimately connected to the windy tundra of these hills, that the rainforests of Sitka seem dark and scary.  But something about that fear, and the leap of faith required of this next adventure also makes me feel alive.  It makes me acutely aware of everything I’ve ever taken for granted here.  It makes the colors brighter, the wind sweeter, smiles more friendly, and it makes me treasure hugs and conversations from friends more than I thought possible.  If you see me grocery shopping and you ask how I’m doing, only to have me start crying in front of you, please don’t be alarmed.  It’s not a negative.  It’s good to love so deeply that you are heartbroken when it begins to come to a close.  Even if it is to a place.  And I am definitely heartbroken.  I am hopeful, and grateful, excited and heartbroken.
Posted by mrs.brewer at 11:11 PM 1 comment:

mrs.brewer
A newbie stay at home mama, laughing along the way with this wee one she has been graced with.

More of the Wonderfully Imperfect...